7 Beautiful Reasons To Visit The Cathedral Basilica Of St. Louis

St. Louis is home to Gateway Arch, St. Louis-style ribs, a population that consumes more barbecue sauce than any other in the nation, and two historic Catholic cathedrals. St. Louis was founded by immigrants from France, Ireland and Germany and named after St. Louis IX of France, a king of great faith. These immigrants brought their beliefs to their new homes, and as a result, Catholicism has deep roots in the Gateway City.

The original cathedral, also named for St. Louis but often referred to as “the old cathedral”, is located near the Mississippi River and the Gateway Arch. St. Louis Cathedral is “the new cathedral”. The groundbreaking ceremony took place in 1907. Today the structure is tall, with its distinctive green-tiled dome rising over 217 feet. The building is reminiscent of some of the most beautiful churches in the world: Hagia Sophia in Istanbul, St. Mark’s Basilica in Venice and St. Peter’s Basilica in Vatican City.

The exterior is Romanesque, the interior is Byzantine with its distinctive domes and mosaics. The plan of the church resembles a cross, with the narthex, nave and sanctuary forming the long part of the cross and the transepts east and west forming the crossbar.

Be amazed as you open the hand-carved exterior doors that are 14 feet high and 8 feet wide. The interior of the cathedral is a work of art in keeping with tradition. In the early days of the Church, many of the believers were illiterate. Paintings and mosaics depicted biblical stories, the crucifix reminded them of the suffering and death of Jesus, and statues of saints honored holy men and women of the past and kept their memories alive.

Here are just a few reasons to visit the magnificent St. Louis Cathedral.

The cathedral’s mosaics are second to none in the western hemisphere. Twenty different artists used 41.5 million glass tiles in 7,000 colors to cover 83,000 square feet – a project that began in 1912 and wasn’t completed until 1988. Every part of the church has a theme. Some of these are the creation story, the Holy Trinity, the essential principles of the Catholic Faith, and the history of Catholicism in America and St. Louis.

The historic bay and dome

After passing the narthex, which is covered in mosaics depicting St. Louis IX, you will enter the historic bay. This section was the last to be completed. The mosaic of the south dome shows the red seal of the Archdiocese of St. Louis against a blue background.

The historic bay is dedicated to American saints, major events in St. Louis Catholic history (including First Mass and Baptism), and the work of the St. Vincent de Paul Society. A mosaic shows Joseph Cardinal Ritter, who welcomed black and white students to school in 1947. Integration in St. Louis came seven years before the Supreme Court banned segregation in the state’s schools.

Between the historic bay and the sanctuary, the central dome rises 143 feet. Against the background of red tiles, four mosaics span the Old and New Testaments and are the artistic highlights of the basilica. The Holy Trinity mosaic is based on an image from medieval France, the Throne of Grace. It shows how God the Father cradles Christ crucified under a dove symbolizing the Holy Spirit. 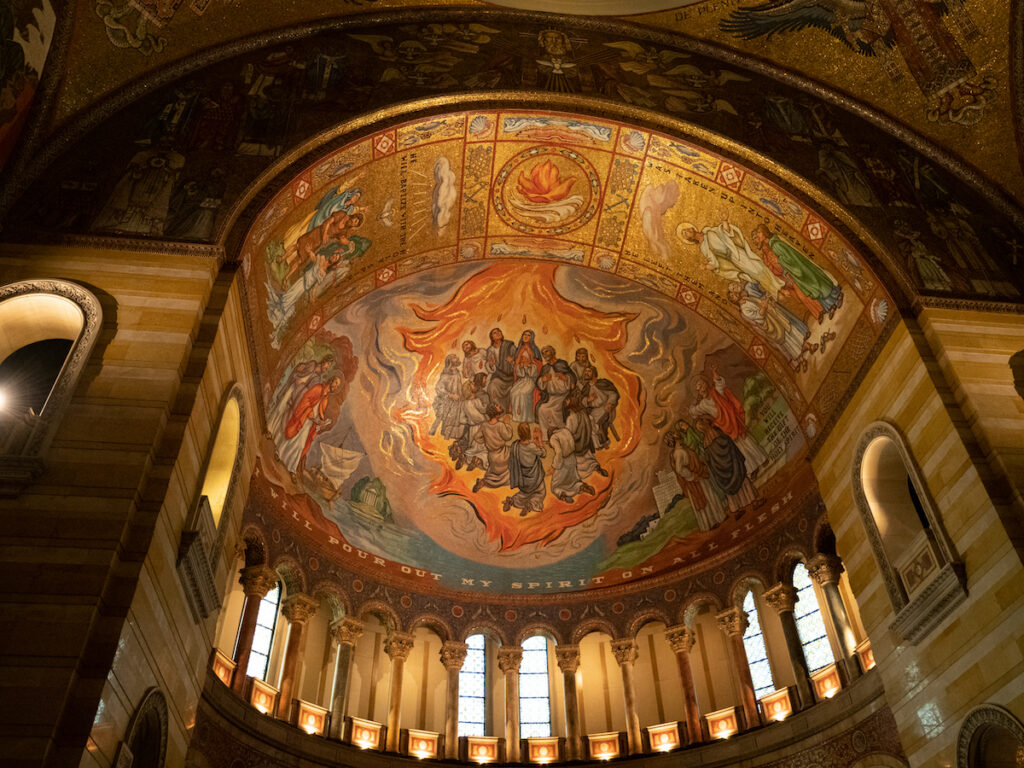 The four large arches around the central dome show mosaics depicting the essential truths of the Catholic faith: creation, redemption, sanctification and judgment. The sanctification arch also shows the Holy Spirit as a dove, and seven angels around him hold seven little doves that represent the virtues that the Holy Spirit bestows: wisdom, understanding, right judgment, steadfastness, knowledge, piety, and fear of the Lord.

When you face the sanctuary, you will notice the mosaics on the triumphal arch. These show the greats of the Old Testament – Noah holds a dove, David with his harp and Solomon with the architectural plans of the temple he built – as well as 12 saints, including St. Peter, St. Francis of Assisi and St. Patrick.

To the east of the central dome, the mosaic in the half dome shows the resurrection of Christ. The western half-dome shows Pentecost, which is considered the birthday of the Catholic Church. The orange flame of the Holy Spirit devours all the apostles and the mother of Jesus, Mary. 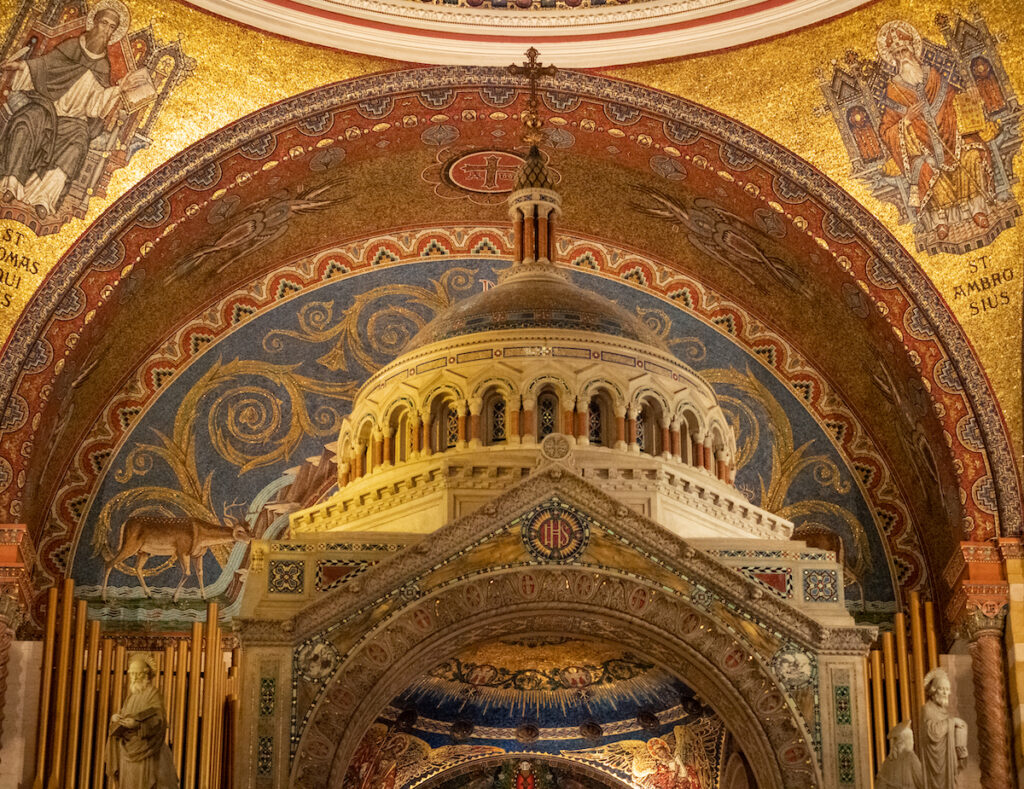 2. The sanctuary and baldacchino

A marble crucifix hangs in the sanctuary, flanked by statues of the Mother of God and St. John the Evangelist. A canopy, called a baldacchino, sits above the altar and is supported by 14 Italian marble columns, each 2 feet in diameter and 20 feet in height. Statues of the Evangelists – Sts. Matthew, Mark, Luke, and John – stand around the dome, which is a replica of the cathedral’s outer central dome.

Mosaics also adorn the dome over the sanctuary. Here the 12 apostles, each 14 feet tall, stand in front of blue tiles. A mosaic above the bishop’s seat or the cathedra shows a crown and a lily. The cathedra turns this church into a cathedral or the official seat of a diocesan bishop. An ombrellino or umbrella and a tintinnabulum or bell are displayed near the altar. These two points mean that the church is a basilica. On April 4, 1997, Pope John Paul II named St. Louis Cathedral a basilica or a particularly important place of worship. It is for this reason that the church is now referred to as the Cathedral of St. Louis. 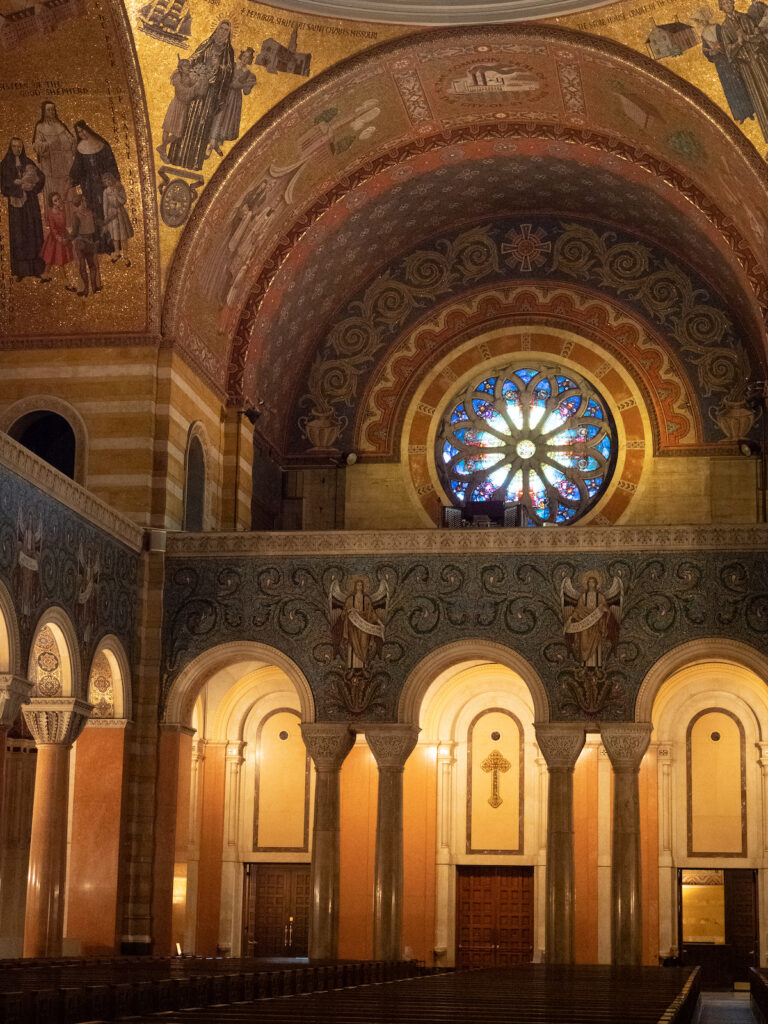 Behind the baldacchino there is a red rose window with a golden cross and a crown of thorns. This and the blue rose window at the south end of the cathedral were designed by Tiffany and Company. 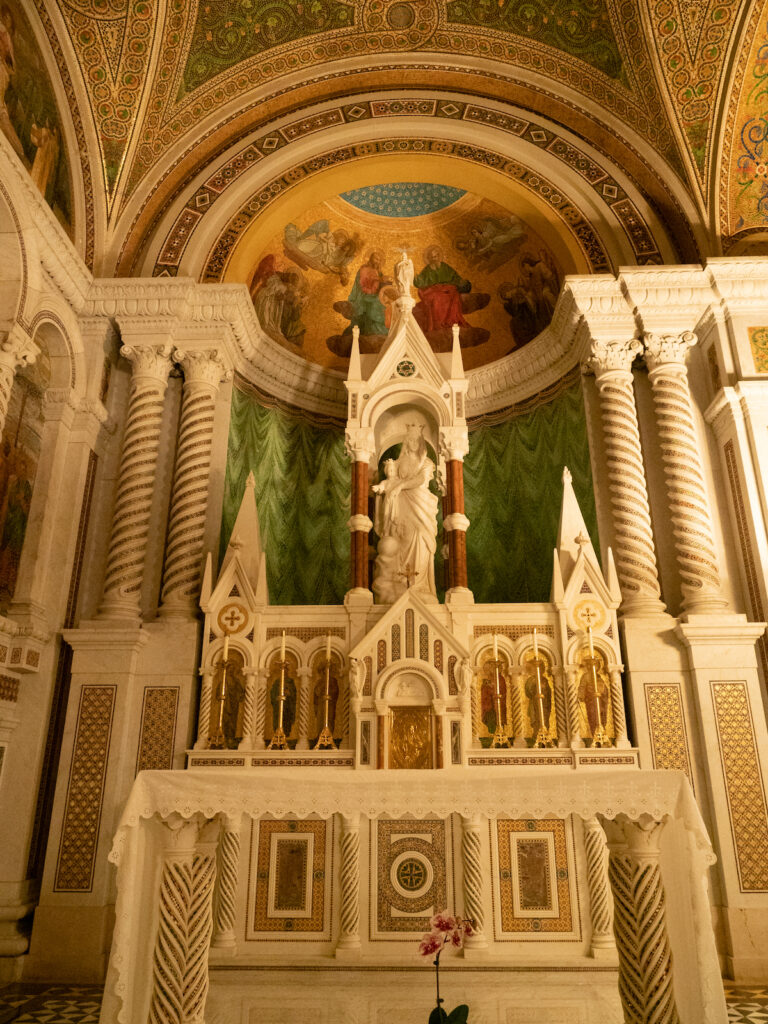 There are four intimate chapels on the edge of the cathedral. They each have a specific purpose.

To the east of the sanctuary is the Chapel of the Most Holy Sacrament. The bronze doors come from the Austrian exhibition at the 1904 World Exhibition in St. Louis. The chapel benefactor was the honorable Richard Kerens, an ambassador to Austria. The chapel was completed in 1917, three days before Austria and the United States severed diplomatic ties before World War I. Photography is not permitted in the Chapel of the Blessed Sacrament, which is reserved for private prayer.

To the west of the sanctuary is the Chapel of the Blessed Virgin, designed by Louis Comfort Tiffany himself. The chapel’s mosaics show the life of Mary and her role in the church. A plaque at the entrance to the chapel commemorates the time Pope John Paul II spent in private prayer during his 1999 visit to the basilica.

Louis Comfort Tiffany also designed the All Saints Chapel, which is west of the historic bay. Mosaics depicting the saints line the walls, but the statue of Saint Joseph is the most distinctive feature of the chapel. Don’t forget to marvel at the ornate ceiling and floor too.

The last chapel east of the historic bay is the All Souls Chapel. The black marble in the lower half of the chapel symbolizes death, while the white marble above symbolizes eternal life. Several cardinals and an archbishop are buried in the crypt under this chapel, including John Cardinal Glennon, who laid the foundation stone for the cathedral. The cardinals’ red hats hang from the ceiling of the chapel. A statue of the risen Christ completes the chapel.

One of the most recent additions to the basilica is the Sacred Heart Shrine in the west transept. It shows a mosaic of the Sacred Heart of Jesus, a replica of a Spanish painting. The artists used 30 types of marble and onyx to create the mosaic. 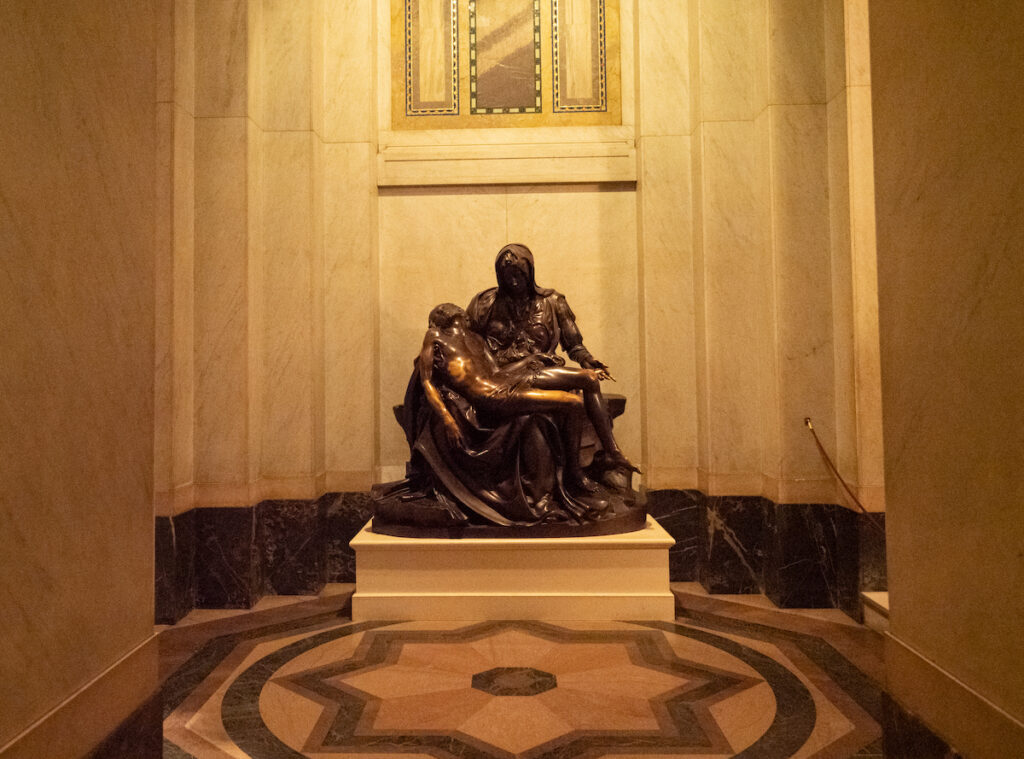 6. The replica of the Pieta

It’s hard to believe that Michelangelo was only 24 years old when he modeled the Pieta. A bronze replica of his masterpiece is on loan from the cathedral and is located near the Blessed Sacrament Chapel. 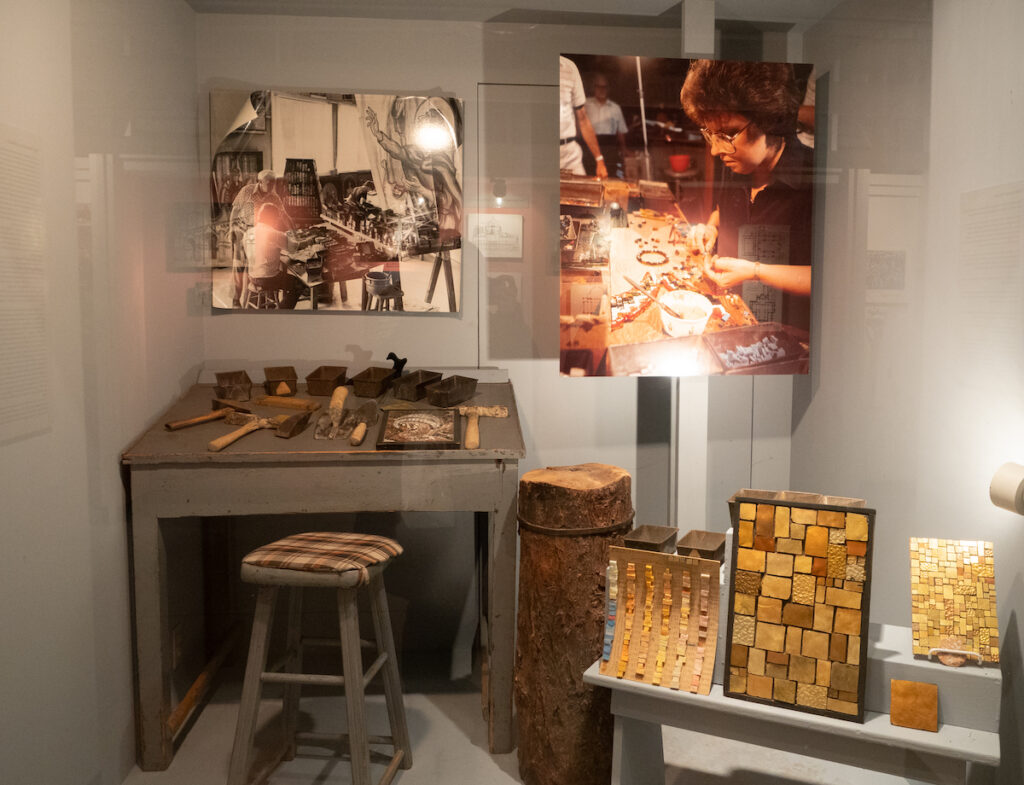 7. The mosaic and church museum

To better understand the art of mosaic making, visit the museum in the crypt or in the basement of the cathedral. Paul Heuduck started working on the mosaics in 1912. His son Arno was six years old at the time. Arno later took over where his father left off. The two men installed 90 percent of the mosaics in the church.

A second part of the museum commemorates the visit of Pope John Paul II in 1999. A special chair and knee protector with needle padding, designed and sewn by the parishioners of the cathedral, are on display.

What you need to know before you go

A guided tour is the best way to visit the cathedral. Note that these tours are not offered during masses or other church services. The cathedral also offers virtual tours.

The cathedral is wheelchair accessible.

Planning a visit to St. Louis? See what else the Gateway City has to offer on this page.