Architectural origins of St. Louis can still be seen, but you’ll have to look closely

The European legacy of early everyday St. Louis architecture – Poteaux-sur-Sol, half-timbered and other structures – was recently explained and relativized by Andrew B. Weil, Executive Director of Landmarks.

Weil was in good shape when he opened a series of four lectures on architecture. His talk was given in a grand new urban building called Ritz Park, a pocket-sized public amphitheater recently masterfully landscaped north of the King and I restaurant on South Grand Boulevard. Additional lectures will be held at the St. Louis Art Museum and the Central Library of the St. Louis Public Library.

The location for Weil’s lecture – and Weil’s lecture itself – couldn’t have been better. The park is designed for lectures and performances and has permanent concrete benches on which the audience can look directly at the performance platform. Water gushes into a pool and flows into a small stream that runs through the grounds.

As for the conversation, it wasn’t your usual conversation about a pretty house viewing, nor was it one of the cautionary stories Landmarks regularly has to come up with about buildings at risk. The lecture identified reasons for regret and disappointment and rejoicing and hope at the same time.

Weil did not skip the various plagues of destruction that were visited on the architectural fabric of the city of St. Louis. These include a devastating fire in 1849, as well as city-sponsored land clearings and federal urban renewal and highway development plans, and the clearing of 40 square blocks of 18th and 19th century architecture for the Jefferson National Expansion Memorial. But it also presented a clear and matter-of-fact representation of the glorious architectural heritage that we enjoy and that we so often overlook or take for granted and, in some cases, know absolutely nothing.

Native residential architecture from the French colonial era was the foundation on which Weil’s lecture was built, but not tight because it mixed architecture, urban planning, business and government into the mix and made connections. This native architecture was generally based on necessity and was built by workers and citizens and owned or rented for use as apartments, stables or small businesses.

Most of the buildings were planned by builders and craftsmen and were shaped more by utility than aesthetics. Often times, these structures have been heavily influenced by memory and ties to styles imported into America by an increasingly polyglot immigrant population.

Very early on, the buildings often consisted of the basic structures Poteaux-sur-Sol and Poteaux-sur-Terre, buildings that were framed by tree trunks arranged perpendicular to the ground, with the timbers resting on sills and / or sunk into the ground and with a mortar connected were called pierrotage, a mixture of clay or lime and stones.

The Church of the Holy Family in Cahokia was built in 1799, replacing a similar structure that was built 100 years ago.

This region offers the apotheosis of this style. It’s the late 18th-century Church of the Holy Family in the village of Cahokia, just minutes from downtown St. Louis. Other examples are found south of St. Louis in Missouri and Illinois with relative abundance.

Ste. Genevieve is a good place to stop when on a French colonial pilgrimage. There you will find a national landmark, the Louis Bolduc House, now a museum.

Later, as immigration became more diverse, houses with any number of European ties were established – Weil showed a house of Alsatian inspiration. A barn in South St. Louis has features of timber framing traditions that developed in Europe. 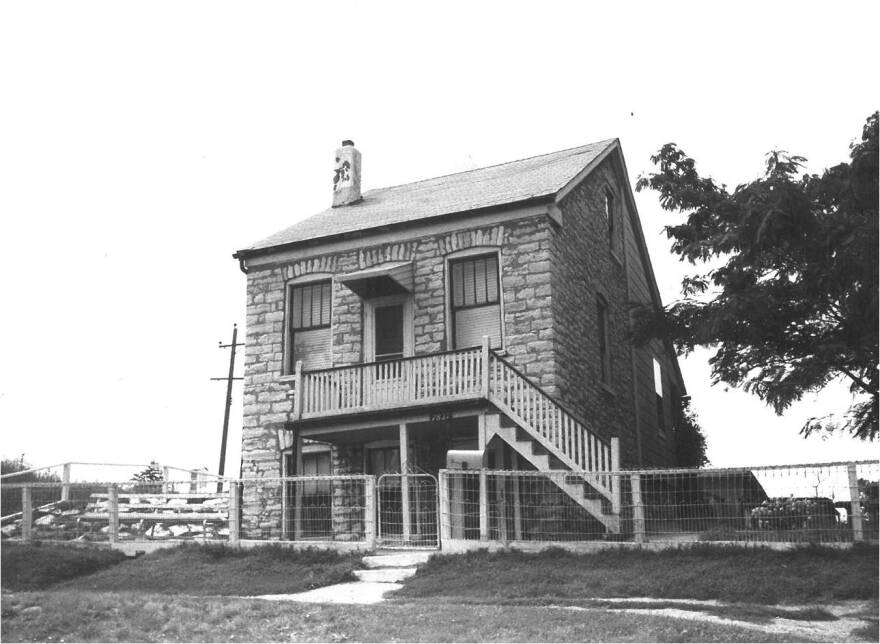 The Otzenberger house is located in Carondelet.

Weil began the conversation by catapulting us back into the 18th century and showing watercolor drawings of what existed then, idealized of course, but visual offerings of a time for which we have little actual evidence of what we looked like. Photography began its titanic development in the third decade of the 19th century and in the following decades the cityscape and landscapes of the region were captured in various photographic media.

For Weil, the best information about the growing and expanding city comes from a remarkable document, perspective, or bird’s eye view of St. Louis presented in a series of books. It is “Pictorial St. Louis”, commonly known as Compton and Dry.

Richard J. Compton published and Camille N. Dry illustrated this treasure of 1875, and a contemporary publisher note proclaims it as “an atlas of 110 contiguous views which, when put together, would give a panorama of 9 by 24 feet. … the detail is minute … such obvious accuracy would have been an achievement beyond any reasonable expectation. “ 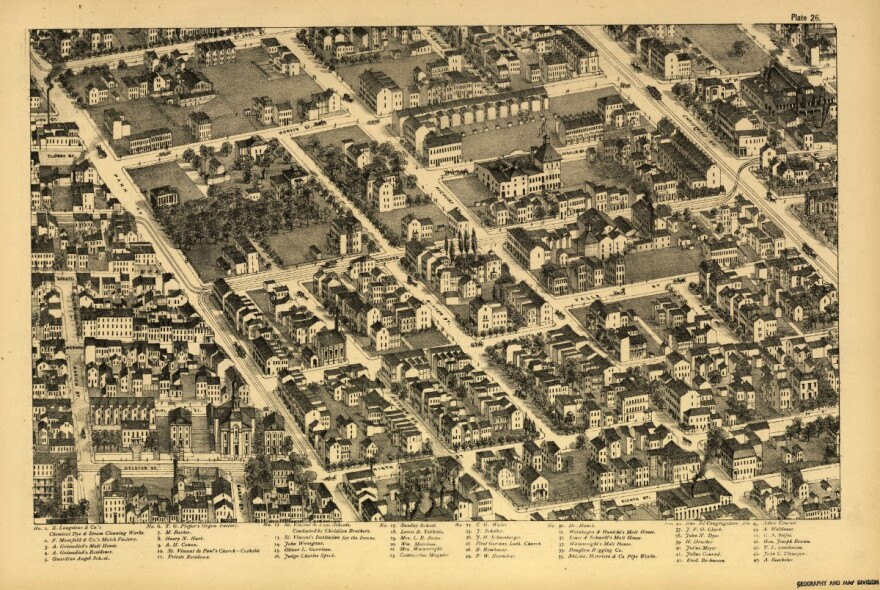 On this side of the Compton & Dry Pictorial St. Louis, Park Avenue is the main street on the left and Chouteau Avenue is on the right. Eighth Street is below.

Dry reportedly floated in a balloon over the east side of the Mississippi for a bird’s eye view of the city and made sketches aloft. From these linear definitions the astonishing document “Pictorial St. Louis” emerged. It is characterized by a high level of attention to detail and enthusiasm for its dynamics and its generally absorbent properties.

Weil was a fairly accurate “snapshot” of the city in a moment of its transition from its French colonial roots to a time of commercial development and population migration. Incidentally, these migrations became the locomotive for residential and business movements in St. Louis. And the word locomotive is not necessarily used metaphorically. Upon completion of the Eads Bridge, the steamship economy was sunk, a destabilization that had its own repercussions on the inner city. 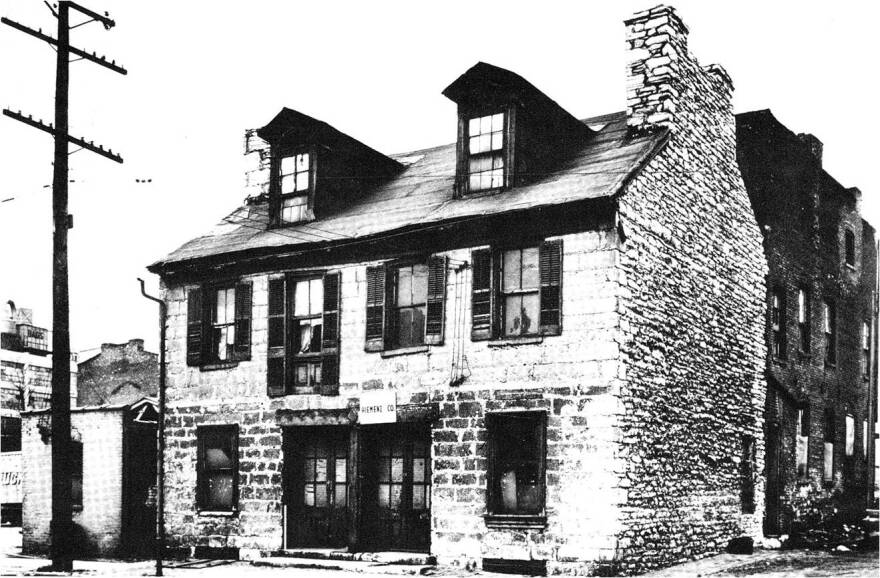 The Jean Baptiste Roy home on South 2nd Street was demolished in 1947.

Since the 19th century we have turned our collective rather carelessly and resolutely towards the river and chugged west. Compton and Dry is proof of that. The pictures also show the scraps and treasures of the French residential heritage in the late 19th century. “Pictorial St. Louis” did not stop at the city limits. It includes mansions set in large farms on the outskirts of the city and St. Louis County. In the locations shown in Pictorial St. Louis, the scanty remains of ribbons of land that were common fields can still be seen – land that is common to the citizens. When this land gained commercial value it was sold and there is little evidence of it.

Compton and Dry’s illustrations also show geological conditions that in their own way shaped history and influenced the rise and fall of neighborhoods. Mill Creek, for example, divided downtown east to west, and as the westward treks became more and more energy consuming, the valley served to isolate the downtown area into an island as the homes in the north and south became mostly empty dramatically on the north side, where the housing stock was older and less well-maintained, Weil said. A similar phenomenon can be seen in southern St. Louis, but there is still much more of his 19th century housing stock left – such as the Soulard and LaSalle Park neighborhoods.

Weil provided the audience with a lens through which the architectural St. Louis can be viewed critically as an organism that grows and shrinks, suffers from various urban diseases and greed-related duplications, and recovers from the loss of a dynamic and sophisticated public transportation system that followed Elevation of the automobile through various forms of human separation and so on. But ultimately, in architecturally and historically intact locations, St. Louis survives an urban organism that houses a complex population that includes you and me for better or for worse. It’s a place that needs work, has big problems and prejudice, and overall, it’s a pretty good place to live. Because indicates that posture has value.

In this moment of hell-zapoppin ‘challenges to accepted norms on the local, regional, national and international stage, moments of enlightenment and rejoicing are important as long as they are worthy and evoke vigilance as well as pride and amazement.

Distinguished St. Louis architectural historian, conservationist, and professor Esley Hamilton will be speaking at 6:30 p.m. on Thursday, October 22nd at the Central Library on 13th Street and Locust Street. According to landmarks, Hamilton will discuss the architecture of Scotland from early castles and cathedrals to the beloved and despised Scottish Parliament Building in Edinburgh in 2004, designed by contemporary architect Enric Miralles. Hamilton will also feature works by Robert Adam and Charles Rennie McIntosh in its eclectic Scottish mix. The conversation is free. The St. Louis Art Museum has taken note of mid-century modernism and will open a major exhibition on November 8th on this rich vein of visual history. The modern is an expertise and enthusiasm of the historian Mary Reid Brunstrum. On Friday, November 13th at 7pm, she will speak in the museum’s Farrell Auditorium on “Modern Architecture in St. Louis, 1928-1968: An Expanded Perspective”. Your talk is free and promises to build on the foundation that Weil built and show how architecture in St. Louis has evolved. Eric Mumford, a professor at Washington University’s Architecture College, has written extensively on the modern movement in Europe and America and some of its most famous contributors. For example, Mumford is an expert on the work of the International Congresses of Modern Architecture (CIAM) and on the brilliant Catalan architect Josep Lluís Sert i López, who is the subject of his lecture. As a designer and evangelist for modern architecture, Sert made enormous contributions to the architecture of the 20th century. He helped bring Le Corbusier to America and was commissioned to build his Carpenter Center at Harvard. It is Corbusier’s only North American building. Sert even has a connection with St. Louis. Fumihiko Maki, designer of Steinberg Hall and the Sam Fox School of Design & Visual Arts buildings at Washington University, worked with Sert in Cambridge from 1955 to 1958 before returning to Japan to open his own company. Mumford’s talk on Sert will be held on Thursday, November 19 at 6:30 p.m. at the Central Library, 13th Street and Locust Street. Free.

When is St. Louis Taco Week?