If you had told David and Meggan Sandusky two years ago that they were going to shut down the BBQ at their Grove restaurant, BEAST Butcher & Block, they would have thought you were crazy. After all, barbecue is the reason the place even exists – it was David’s success as a pitmaster on his first project, Belleville’s BEAST Craft BBQ, that put him in the national spotlight and gave him a platform to open more restaurants. It’s more than what he does; it is who he is.

But beyond that, BEAST Butcher & Block was David’s baby. Sure, opening an outpost in St. Louis of its grill brand made business sense, but the Grove Smokehouse was never meant to be BEAST Craft BBQ Part Two. It was his flagship, the place where he could indulge his creativity and push the boundaries of grilling – an ambitious, 6,000-square-meter giant with a traditional grill counter, a butcher’s shop and at its heart a living fire, test kitchen, event space, showroom called Skullery which was designed as his playground.

COVID-19 had other plans. Like any other restaurant that tried to survive during this pathetic pandemic, two-year-old BEAST Butcher & Block was bleeding money. While David and Meggan had the robust support of their customers and a product that translated well to take away, it just wasn’t enough. The high cost of quality meat and the sheer size of their Grove operation created an overhead that was unsustainable when offset with the reduced cash. They desperately tried to keep their staff busy and open, even when they couldn’t pay the bills. but in the end it was undeniable that they couldn’t go on as usual.

This February, David and Meggan took the bold step of shutting down BEAST Butcher & Block’s barbecue operations – a difficult decision that they hoped would save the business in the long run. However, instead of shutting down completely, they decided to rely on the butcher shop to act as a bridge when they could resume normal operations. In addition to regular meat, ready-made and light food choices – part of the business that had actually grown during the pandemic – the Sanduskys decided to offer sandwiches that could use all the butcher’s options. 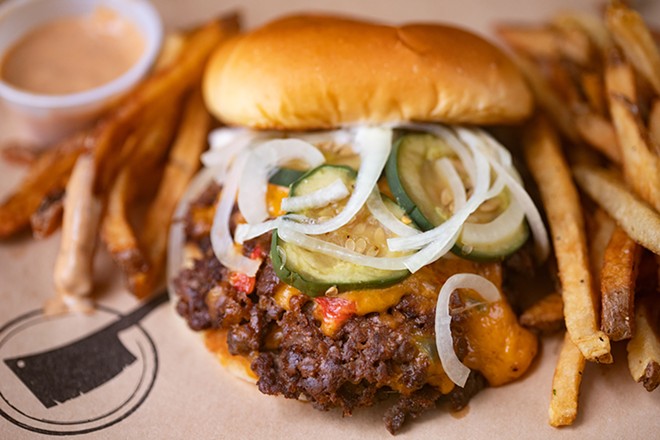 It turns out they can do a lot. Though the menu is small – just six sandwiches and a handful of side dishes – the butcher does a good job of combining the BEAST grill backdrop with the signature delicatessen offerings. A pimento smash burger, for example, shows both the beauty of BEAST’s high-quality, freshly ground meat and a little Mediterranean influence with a spicy pimento-cheese spread. The cheese seeps into every crack in the two patties; shaved white onions and bread-and-butter pickles sliced ​​through the decadence.

The Italian beef is possibly the best version of the Chicago style sandwich I’ve ever had. The braised chuck has a very delicate texture and is infused with gentle smoke that is cooked right over a wood fire. The meat is generously stacked on bread that is crispy on the outside and soft on the inside, making it act like a sponge for the au jus and the flavorful giardiniera that brightens the dish. The overall package shows why a grill background enhances a traditional delicacy offer.

This wood smoke also plays an important role in the typical dish of the restaurant, the Pit Roasted Beef & Cheese. Sandusky is especially proud of this product – so proud that he publicly opposed it to the King of St. Louis’ roast beef, Lion’s Choice, leaving the fast food brand no choice but to praise its efforts. How could anyone do anything else? The thinly shaved beef is cooked right over wood, so the sweet smoke is a standout, but not overwhelming, taste. The result is meat that has the meatiest beef flavor you can get, which is emphasized by the sebum-grilled bun. Before he closes it with the top half of the bun, he covers the meat with a velvety white cheddar cheese sauce and sprinkles it with some barbecue seasoning for a little spice. BEAST’s roast beef comes from someone who drinks their morning coffee from a Lion’s Choice branded mug.

Sandusky is also proud of BEAST’s snoot sandwich, with which he respects the old-school St. Louis grill created by black pitmasters that paved the way for the city’s BBQ boom. His version is as traditional as it gets: pieces with a crispy meat sauce that are served on sliced ​​white bread with homemade cucumber. The snoot is like a crispy, cheeky pork chip, similar to a hearty crackling. This makes it a little difficult to eat on the bread if it sits too long. However, if you peel it off and eat it alone with the bread as a sauce, it’s pretty tasty. 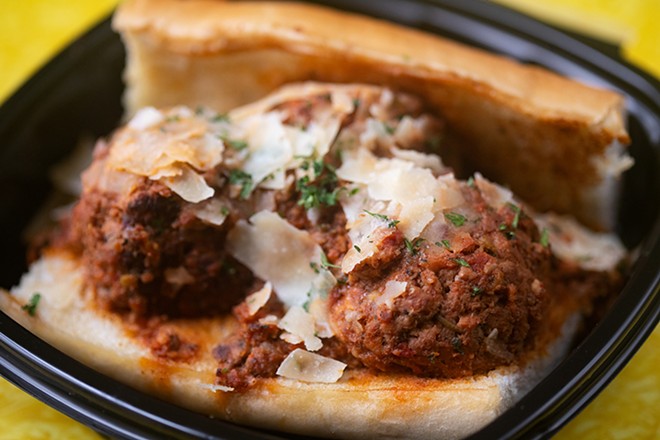 While picking a favorite from BEAST’s sandwiches is difficult, the Smoked Meatball Sub is a serious contender for first place. The butcher team make their pork from smoked pork, resulting in a salty-sweet, rich meatball that’s sufficiently fat without looking over the top. The balls are in a crispy hoagie roll and are smothered in light tomato sauce and shaved cheese. They are like spherical Bolognese in the shape of a sphere.

Sandusky toyed with the idea of ​​leaving things like the meatball sub and fried beef on the restaurant’s menu when that side of the business reopens. In fact, the butcher’s side of the business – not the grilling – could serve as general inspiration for the place. This means that in addition to traditional smokehouse offerings, diners can get chops, sausage, and even smoked meatballs over a pile of spaghetti. It’s a big change from his and Meggan’s original plan for BEAST Butcher & Block, but if this terrible year has shown them anything, it is that their talents go well beyond grilling.

On eve of openers, Manfred hopes full capacity by midsummer