From Tacos To Chocolate Bars, St. Louis Chefs Get Creative With Cannabis-Infused Food

Food infused with cannabis has come a long way from dormitory brownies.

Opportunities are growing for Missouri’s nearly 100,000 medical marijuana card holders who prefer to consume cannabis by eating rather than smoking. The St. Louis area is popping up with pharmacies selling soda, gummy bears, and cookies.

While other companies are ramping up production, a team led by Dave Owens, director of culinary arts at Proper Brands, is one of the few manufacturers of cannabis-infused candy bars in the state.

Owens has been making sweets for more than a decade, most recently as head chocolatier at Bissinger’s.

“Using cannabis as an ingredient is completely different from me,” he said. “But I just consider it a different, only highly regulated ingredient.”

The smell of bananas was in the air one morning in his confectionery near Brentwood, in western St. Louis County. Candy machines hummed as large tubs of white chocolate, banana powder, and distillate – a form of concentrated cannabis oil – churned up. 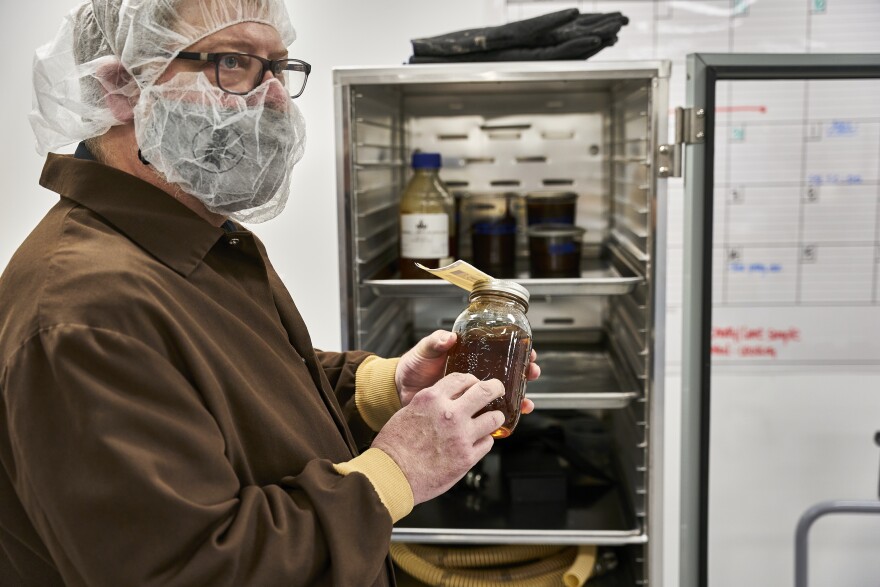 “It’s very much the consistency of honey right now,” said Owens, pulling a glass of distillate out of a warming container. “When it’s room temperature, it’s like tar and you can’t handle it.”

Owens said he had to carefully measure the exact dosage of the distillate and distribute it in cocoa butter before mixing it with the chocolate. The right aroma and the right dosage are crucial.

“Because the idea is, even though it’s a medicine here in Missouri, it should still be a fine confection and everyone should enjoy it and want just a little more,” he said.

Owens’ small team can produce over a thousand candy bars and 20,000 gummy bears a day. Soon they will also add mints to the list.

Down the hall from the kitchen is a vault of candy bars waiting to be shipped to pharmacies across the state, including Proper Cannabis in the St. Louis area. Owens says it takes three to five days to get results from the testing lab to verify the amount and quality of cannabis used in the products.

“I want people to know that there is a lot going on behind the scenes to get this on the shelves and it takes a little while,” he said. 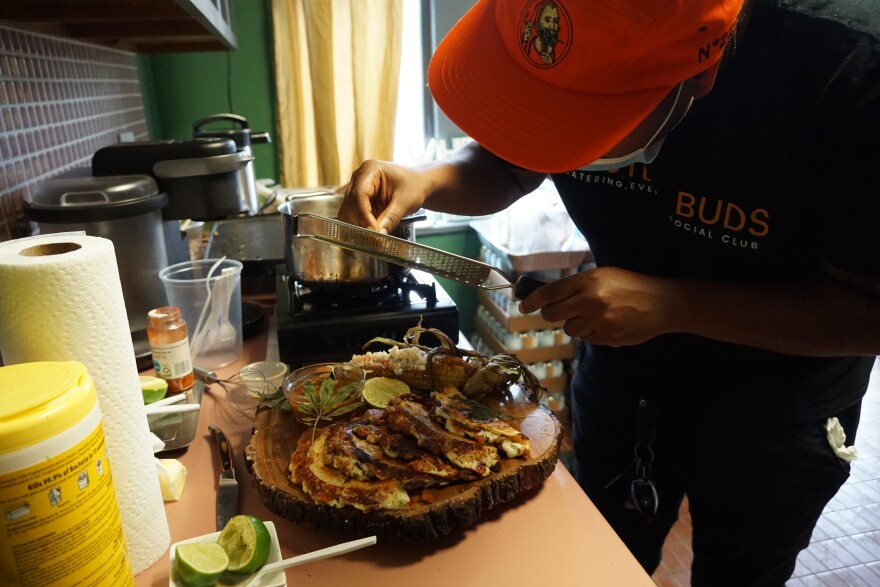 “A normal meal – with a surprise”

The demand for food from pharmacies in Missouri is booming, but some say there must be tastier options.

Brennan England is President of the Missouri Minorities Chapter on Medical Marijuana and the owner of a cannabis use lounge called The Cola Lounge on Cherokee Street.

He argues that the pharmacy market is oversaturated with sugary goods.

“For the medical patient most in need, this is the opposite of what they should have with their medicine – it’s inflammatory, it’s acidic,” he said. “It’s really important to find ways to consume cannabis that are fun and overlap with your normal lifestyle, but that aren’t just sugary treats.”

That’s a big part of the educational component of his lounge, where he recently held a cooking class on making cannabis-infused butter. It also offers a space for cannabis chefs to host private dining experiences.

Cannabis catering company Rooted Buds has launched since its first event in the lounge last year. Co-founders Chef Snoop THC Hollins, Chef Dow Dugger, and Denise Winfield-Hollins have government cultivation and care permits that allow them to grow and cook with cannabis that contains THC, the psychoactive component of the plant.

But they only cook with THC for their patients and for private parties where members have their health cards. Otherwise, they can only use CBD cannabis in their meals. Hollins said that users of CBD won’t feel high, but they can expect to feel “nice and gentle.”

“It’s kind of the equivalent of a glass of wine,” she said. 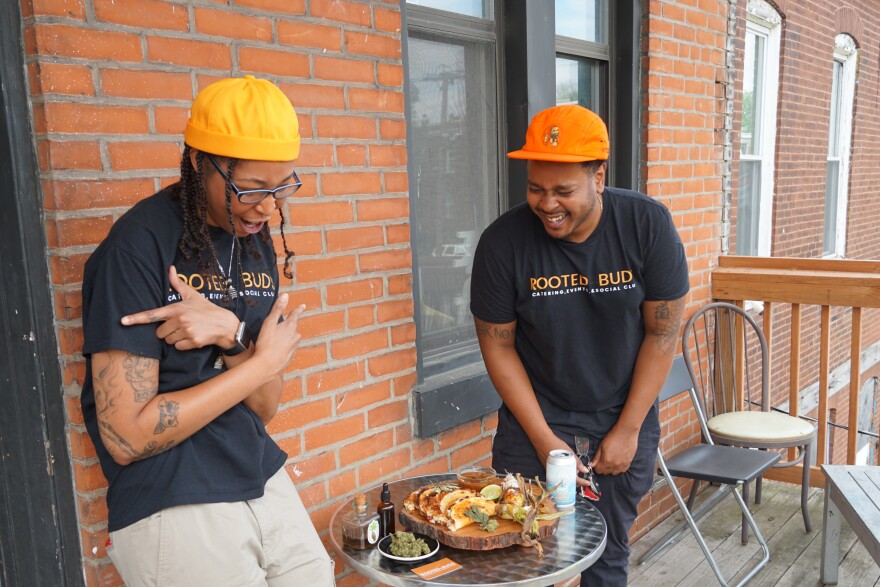 Similar to wine, different strains of cannabis have a variety of tasting notes called terpenes. Hollins said these can be supplemented by combining the right strain with the right ingredients.

“When you smell cannabis, think of citrus fruits or pepper, cinnamon,” she said. “As with wine, we’re going to be like, ‘OK, if I smell some citrus that probably has lime in it, so we’ll probably add a little lime or lemon, something citrusy.'”

Hollins and Dugger have worked in fine dining and bakeries in St. Louis and Chicago for years. This ability is demonstrated by the fact that they artfully layer different strains of cannabis flowers and tinctures over a plate of jackfruit tacos and elote.

They added salt to flavor the jackfruit, oil to fry the tortillas and a pico de gallo sauce. As a finishing touch, Dugger shaves cannabis flowers on the corn.

“The way we infuse is a low, slow process,” Dugger said. “It’s not that 40 pounds of weed, that brownie your buddy made you. It’s a normal meal – with a surprise. “

The cheese oozed out of the tacos when Hollins tried a taste.

“If you bite it you can literally taste the herb, but just a little bit of earthiness, like it’s fresh coriander picked from the garden,” she said.

The culinary duo said their goal is to break stereotypes about cannabis and demonstrate the plant’s benefits in a way that people can relate to.

“We can bridge through food,” said Dugger. “Everyone comes to someone’s home and they always eat, they have fun, they chat, they meet someone new – that’s a bridge.”

Class Acts: The champions for health equity | The Source