On the night of September 17, 2017, after the beatings and arrests subsided, St. Louis officer Louis Naes returned to his office to find his partner Luther Hall, a black detective, and another undercover officer. Hall uploaded the photos and videos he’d taken that night.

“He looked dazed,” Naes recalled on Wednesday from the witness stand in front of the federal court. “He didn’t look himself.”

Both officers had been used covertly as demonstrators that night, with orders to fit in with the groups set up in response to the acquittal of ex-St. Louis Cop Jason Stockley. But the night hadn’t gone as planned.

Like dozens of demonstrators that night, Naes and Hall had been arrested. However, hours after her release, Naes testified that he was shocked by the condition of Hall’s chipped and cut face, and even more so by his statement:

“He told me he was kicked in the ass by the police,” said Naes.

More than three years later, the September 17 flogging of Luther Hall – the same night as the infamous “cauldron” where officials rounded up more than 100 people in a brutal mass arrest – continues to be a defining moment for the St. Louis Metropolitan Police station. A total of five officers were charged with various roles in Hall’s beating and cover-up attempts. Two have already pleaded guilty. The criminal case against the remaining defendants Dustin Boone, Christopher Myers and Steven Korte began Tuesday in front of an all-white jury.

On Wednesday, when the three officers’ lawyers made their separate opening statements and interviewed the first prosecutor’s witnesses, a common theme seemed to emerge: a strategy that suggested that Hall, through his own actions, invite the beatings of his colleagues.

The issue began with attorney John Rogers, whose client, City Police Officer Steve Kortes, was charged in 2019 with violating Hall’s civil rights and making false statements to the FBI. Rogers’ opening speech blew up the “Institutional Deficiency Planning” section and failed to inform commanders of the existence of two undercover officers in the field that night.

In addition, no “safe word” has been set for officers to signal their uniformed colleagues on the street. According to Rogers, it was these administrative flaws combined with Hall’s own behavior that led to chaotic beatings and botched criminal investigations.

Rogers described the preparations for Hall’s beating, which began around 8:50 p.m. As downtown officials began the mass arrests, a column of officers dressed in riot gear marched down 14th Street toward Olive, where Hall was standing near a young black man.

At the time, civil disobedience team officials were made aware of reports from two black men involved in breaking windows and pushing flowerpots, Rogers said. But Hall had decided to “escape” with the other man, and instead of facing the officers with his hands up, Rogers accused Hall of hiding behind a control box.

Hall could have raised his hands and complied with the officers’ demands “not to threaten them,” argued Rogers. Instead, Hall “stood” and was immediately thrown to the ground several times and hit with a baton wielded by Officer Randy Hays. (Hays has already pleaded guilty and is expected to be called as a prosecution witness at some point in the trial.)

Rogers’ arguments also touched Hall’s post-beating behavior, centering on the detective’s inconsistencies and refusal to cooperate with investigators. First, Rogers noticed that Hall had not been informed of his injuries and informed the medical staff that he had fallen on the job.

The result of Hall’s actions, the attorney said, was a critical delay in the department’s investigation that allowed a “rumor mill” to swirl through the department. According to Rogers, that dysfunction ultimately led to charges against Kortes, an innocent police officer who was actually more than 20 feet from Hall during the beating.

The effects of Hall’s decision to “hide” behind a control box returned during the cross-examination of Naes, Hall’s white partner. Naes was arrested that night and released unharmed.

Defense attorney Scott Rosenblum, who represented Christopher Myers, tried to urge Naes to acknowledge that Hall had “created a situation” that would make him appear a threat to other officers.

“If cops approached, would you hide in a dark, small area and keep yourself a secret? Does that sound like a safe situation?” Asked Rosenblum.

However, the evidence available makes this argument difficult: Photos by American photographer Lawrence Bryant of St. Louis showed Hall upright behind a switch box just off the street corner. The box is not a closed space, but an object behind which reverberation stands. At least the photos don’t show him crouching or on the ground until he reappears with his face against the sidewalk among several officers. 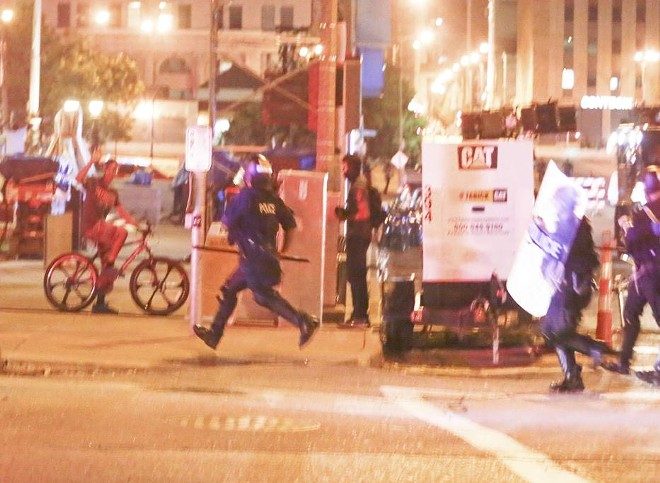 The strategy of attacking Hall’s behavior is characterized by its two-sidedness: no one, including the defenders, denies that Hall was defeated on September 17th. The case has already resulted in a reported civil settlement by the City of St. Louis for $ 5 million, and in the current trial, prosecutors plan to call several officials to testify against their former colleagues.

It seems that Myers, Boone, and Korte’s attorneys are weaving a larger argument about the chaos of the arrest itself, based not only on denying the evidence that confuses their clients, but on the fact that the investigation itself is critically flawed to Hall’s “disability” and, as Rosenblum put it, “to create a situation that would lead other police officers to believe that you pose a risk or a danger”.

The trial continues today as both sides prepare for testimony.