Introducing St. Louis Standards With a Visit to Village Bar

John Forrest recalls that he was hit by a specific phone call about six years ago when he first worked at the Village Bar (12247 Manchester Road, Des Peres; 314-821-4532). Unlike other gigs in the hospitality industry, it wasn’t uncommon for the longtime tavern Des Peres to be asked to host funeral lunches. It seemed a strange phenomenon at first, but it wasn’t long before he realized why these were such frequent requests.

“People called and said that their father had his first beer here and that he had his last, too,” says Forrest. “If you’ve been here for 140 years, you get so many calls.”

The Village Bar may be Des Peres’ cheers, but it is far from the only establishment of its kind in metropolitan St. Louis. Neighborhoods across the city are filled with watering holes, bars and grills, as well as long-standing independent restaurants that mean much more to their guests than just a place to eat or drink. Weave these facilities together with the iconic restaurants, bars, and dishes that represent the city’s food and beverage community, and you end up with some formidable – if not a little worn – fabric that tells us who we are.

During my eight years as a restaurant critic for the RFT, I was asked numerous questions about the performance. Where is your favorite restaurant? Are you anonymous? We have people who come from out of town – where should we take them to eat? However, the only question that has always impressed me is when I am asked why we don’t spend more time and effort covering established locations. While so much space is devoted to talking about the shiny new things, there is usually little room for the people and places that have long run their bars and restaurants. In an industry where failure rather than success in the early years, that perseverance is an accomplishment that deserves to be celebrated, not just for their perseverance, but because they are a living story that makes history our told metropolitan region.

With that in mind, we’re excited to launch St. Louis Standards, a weekly column devoted to the people, places, and dishes that make our food scene what it is. We’ll show icons, of course, but we’ll also shed some light on the establishments that may not be known outside of their immediate community – but are the center of the universe to their regulars.

The Village Bar is one of those places. The tavern is not a hole in the wall, but made it a cross-generational center of the Des Peres community even before Des Peres existed. As owner Mark Disper likes to point out, the bar was founded about four years before the township was founded and started as the region’s post office and general store in 1872. At the time, Manchester was a dirt road, and the building provided food, alcohol, feed, and hardware to travelers westward.

The outfit became a bar after Prohibition and has remained so ever since. While it has changed hands over the years, it hasn’t changed its essential character – that’s one of the reasons Disper thought it was so important to keep it when he bought it in 2016. He had previously been a patron of the bar and had heard rumors that there was some way it could be sold to Schnucks to be leveled and turned into a grocery store. He couldn’t let that happen. 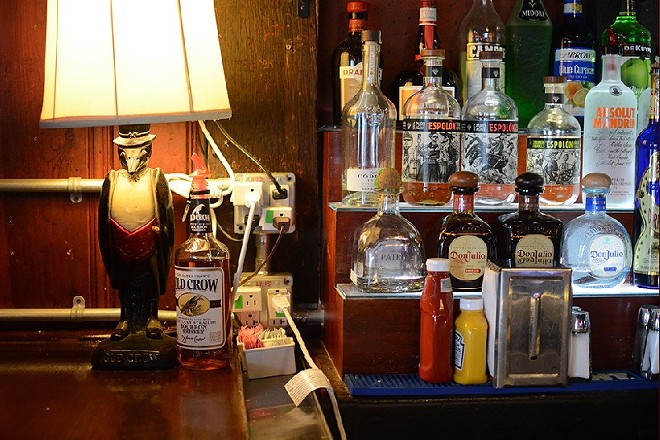 “It is important to preserve the legacy and memories for the next generation,” says Disper. “You just can’t redesign a pub like this.”

Since taking over the bar five years ago, Disper has done a good job of balancing the conservation with any updates needed, cleaning up the area around the bar and refurbishing the adjoining farmhouse that is now part of the Village Bar complex. His biggest project, however, is the rehab of the old barn on the property, which he and his business partners are making the basis of their soon-to-be-operational distillery 1879 Distilling Company.

The project, which Disper hopes to start operating in the coming months, involved a massive renovation of the space using reclaimed and historic components from the St. Louis area. Once the distillery is up and running, it will not only produce high quality spirits, but also serve as a new event space. This, along with the upcoming tasting room being set up in the old farmhouse, makes the Village Bar complex a destination for much more than its famous burgers, onion rings, and ice cold beer.

Even so, Forrest, who is now the general manager of the Village Bar, is confident that the essential character of the place will be preserved, even if the distillery will be a significant addition to the overall complex. It has already been shown that it can be an unwavering presence in the midst of change. Referring to Des Peres ’16 banks, numerous shopping malls, and emergency centers, he believes the reason the tavern has been so successful is because it is confident enough of its own identity to be true to itself, even if that is so means a little old. shabby and worn. It is this charm, he says, that keeps his regular guests coming back.

“It’s got marks and scars,” says Forrest. “Everyone gets beaten up after 140 years, right?”

All over St. Louis, live wires within children’s reach

One of the Midwest’s Best Italian Restaurants Is in the Suburbs of St. Louis