Local Chef ‘Over The Moon’ To Reopen Eat-Rite Diner As ‘Fleur St. Louis’ In May

The historic Eat-Rite Diner in St. Louis is getting a new lease of life thanks to a local chef. Tim Eagan rents the small restaurant on Chouteau Avenue south of downtown to upgrade the place and change the name to Fleur STL.

Eagan brings a long résumé to the project and spends time as a chef for hotels, restaurants in the area and as a private chef at home.

Wayne Pratt of St. Louis Public Radio spoke to Eagan about his plans and how long he’s been watching the high-profile building.

Tim Eagan: I actually saw a friend post on social media in January, and it was a picture of it that had a “for rent” sign on the front. And I took a screenshot, zoomed in, and called him the next day. It’s been in the works since mid-January. And then I signed the lease a few weeks ago.

Wayne Pratt: What’s your timeline at this point?

Eagan: You know, I’ll be super optimistic. I have a lot of my permits and each license is already in place. I will be renovating the building inside and out. Optimistically, my schedule is mid-May.

Pratt: Why is that now?

Eagan: Most people would probably say it’s crazy to do it now.

However, I think the only reason the building was available was because of everything that was happening. So I definitely took it as an opportunity to push something I wanted to do.

I was looking for commercial space. The only thing I think is fantastic is the proximity to Busch Stadium in downtown St. Louis. And people know dinner. You know the place. All in all, I think it was just the right place, the right time.

Pratt: Opening a restaurant is risky at best, but here we are in a pandemic. Does this give you cause for concern or does your strategy change at all in the further course? 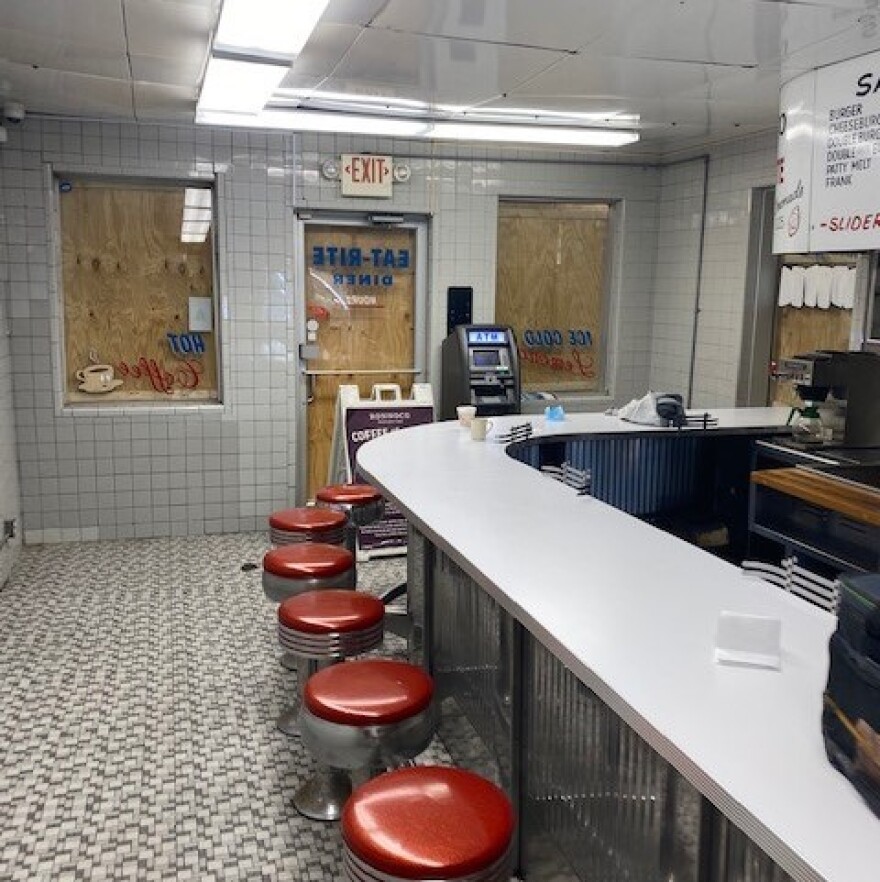 The interior of the Eat-Rite Diner property will see some changes ahead of its scheduled opening in mid-May.

Eagan: In terms of the diner itself, and just in the food service industry in general, I think everything has to adapt. Even if things open up 100%, I feel like the takeout and take away and the curb will be an important factor in restaurant development further.

Pratt: Do you think the number of personal restaurants will go down once you can 100% open?

Eagan: You know, I really don’t. I think it will just grow the business a lot further. It’ll just give you one more way to reach out to customers and bring them your food which I think is great.

One good thing we can get out of restaurants, in my opinion, is all of the takeaway and roadside business, as well as contactless or online ordering.

I think it really is the wave of the future.

Pratt: Do you feel any extra pressure getting involved in the property we’re talking about? Everyone in St. Louis knows the Eat-Rite Diner.

Eagan: I think people are very reluctant to change. However, I didn’t get the right place to continue exactly what it was. Things really just have to adapt and fit into the needs of the places and the needs of the city. It will be something else. You know there is some pressure. You know the items and things that are iconic for this place will always be in the back of people’s minds. But I think once they come in and see what I have to offer and what we’ve done with the place, it will really open people’s minds and know that I’m not ruining a tradition or doing anything else on itself.

Pratt: are you excited? Nervous? Concerned? Maybe all of the above?

Eagan: I’m not really nervous or worried to be honest.

I’m super excited I can’t wait to get in there and cook food for people. It’s been about 15 years since I had my own restaurant. Just to be able to cook my food, bring it to the people – especially in a small, intimate setting where I stand in front of the customers and see it again. I think it’s going to be awesome. I am overjoyed, excited for it.