One Week In: Trial of St. Louis Cops Accused of Beating Luther Hall

The police strike against Luther Hall, a black undercover detective, on September 17, 2017 was brutal. That’s for sure. But during the first week of the trial of three white officers accused of hitting, kicking and pounding him in various ways, defense strategy has repeatedly reverted to uncertainties and gaps in evidence – at the same time, testimony continues to reveal the eddies of chaos and cover-up that broke out after city and police officers learned of the attack that night.

The defendants – Dustin Boone, Steven Korte and Christopher Myers – are each charged with deprivation of rights under the color of the law. Your fate will be determined by an all-white jury.

The trial continues this week with testimony, including the testimony of ex-cop Randy Hays who pleaded guilty to beating Hall with a baton.

But prosecutors and defense lawyers have already done a lot – let’s round up the highlights and what we learned.

September 17th was not Luther Hall’s first protest mandate. Two days earlier, protesters had begun to flood the streets after a city magistrate had found an acquittal in the murder trial of ex-St. Louis Cop Jason Stockley. On September 16, Hall and his partner Louis Naes dressed in street clothes and embedded themselves with protesters in the Delmar Loop area of ​​the university town. Both officers said they wanted to identify and film a group of perpetrators who smashed shop windows after the main protest group broke up that evening.

This is how it should go the next day, when demonstrators held a “die-in” near police headquarters in the city center. Hall testified that he had equipped himself with a phone, handheld DSLR camera, and a backpack with his police ID for the Sept. 17 deployment. He bought a small, tight-fitting shirt for his undercover outfit that left the waist and stomach bare – a move that was supposed to show observers that he was not armed.

Attorney Scott Rosenblum, who represented Myers, spent hours of cross-examination poking holes in Hall’s credibility and sometimes even argued that it was Hall’s behavior that made him appear a legitimate risk to heavily armored officers on the Civil Disobedience Team.

But Hall’s testimony also showed how isolated the undercover officers were that night. Local officials were not informed of Hall and his partner’s mission, and both said that no “safe word” had been established to identify them to other police officers.

The secrecy was intentional, Hall testified. He said previous covert operations had been exposed through leaks: “In recent protests, the department would release information and the information would be passed on by police officers to protesters and the media,” he said at the booth. “We felt we ever did The fewer people who knew about our operation, the better. ”

With the tools of the demonstrators against them

Hall and Naes both described how they account for Ustream, the live streaming platform popular with protesters who returned to Ferguson in 2014. Hall’s stream is major evidence today as prosecutors say it captured officer Christopher Myers’ face during Hall’s beating. (Myers is also charged with destroying evidence of the alleged destruction of Hall’s phone.)

At the booth, Hall testified that he switched to Ustream after discovering that detectives at the department’s Real Time Crime Center – a hub for the department’s surveillance operations – had already ceased live streams of protesters, and for good reason: During the undercover operation at the end of the night, officers released footage. The live streams that filmed the demonstrations gave the police officers literal real-time access to the scenes on site.

Hall even tried using his Ustream channel to alert his police allies of vandalism on Washington Avenue. He said on the stream, “You’re going to screw up Washington” – but no one watched his channel. Minutes later, Hall himself would be arrested.

Eye in the sky, directed elsewhere

Defense lawyers for the suspected officers are trying to cast doubt on the identification of their clients, an argument supported by the fact that officers used to protest that night were not wearing name tags or badges.

Instead, the officers who arrested Hall wore heavy body armor and helmets on the night of September 17, moved as a group, and positioned themselves behind a line of shield-wearing officers – making it difficult to see them through the camera lens of a St. Der American Louis photographer Lawrence Bryant, who shot photos of the arrest near the downtown central library.

As it turned out during the trial, however, the police had access to a camera with a perfect angle of view, as they could point directly at the spot where Hall was standing near the intersection of Streets 14 and Olive.

The camera was under the control of an unidentified officer at the city’s Real Time Crime Center, and it was this operator who redirected the view of the camera to follow a group of people escaping toward Washington on 14th Street while the officers were being held Hall brought to town soil.

According to a review of footage by RFT, the camera spent about five minutes pointing south on 14th Street. Then the camera panned right and rested on the officers around Hall for less than a second before moving on to another subject of obvious interest: a person across the street carrying a large homemade shield and a spear-like object.

The camera followed the mysterious figure for a few minutes. By the time the camera returned to the intersection, Hall and the officers were already gone – a frustrating near miss that left investigators and the public with no conclusive evidence of Hall’s arrest and the officers who beat him. 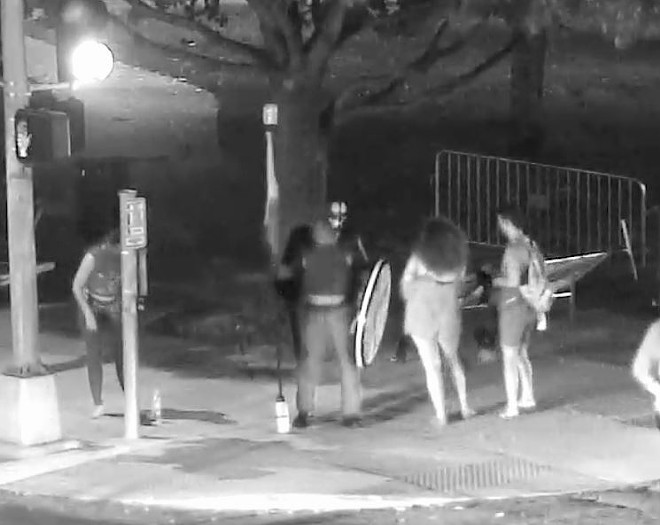 Hall was one of more than 100 people arrested on the night of September 17, but only his beating resulted in charges against officials. The non-cop-on-cop arrests took place just a few blocks away. Police surrounded a mixed group of protesters, bystanders, and downtown residents at the intersection of Washington Avenue and Tucker Boulevard. The officers stood shoulder to shoulder and refused to let their targets leave the area.

The mass arrest known as “the cauldron” resulted in dozens of lawsuits and demands for criminal investigations. In 2019, a class action lawsuit attempted to name more than 350 officials involved in the boiler, but left many identified only as John Doe or Jane Doe. A lawyer cited the officials’ “extraordinary measures” to hide their identity.

On the other hand, the civil disobedience team commander later testified at a civil law hearing that officials viewed protesters wearing goggles or masks as a threat, indicating that “they wanted some kind of confrontation”.

For some protest detail officials, the lack of identification was viewed as a license to engage in indiscriminate violence, and the texts of the officials involved in Hall’s beating showed an astonishing delight at the prospect: On September 15, 2017, Dustin Boone wrote: “”[I]It’s going to be a lot of fun beating the hell out of those shit heads once the sun goes down and no one can tell us apart !!! ”

Despite the widespread violence that night, only Hall’s arrest and beatings resulted in criminal charges. Earlier this year, Hall reportedly settled a civil lawsuit with the City of St. Louis for $ 5 million – a sum that will likely come to mind dozens of others who say they have endured the same treatment.

St. Louis Then and Now: Vandeventer at Highway 40/64