An architecture firm in St. Louis has the idea of ​​building a football stadium in St. Louis to attract Major League Soccer. The sight of the stadium would be directly south of Union Station.

Last May, MLS Commissioner Don Garber met with officials from St. Louis, including Mayor Francis Slay, Governor Jay Nixon and his task force, when they were promoting the idea of ​​a soccer team to build a stadium on the North Riverfront Rams shares.

According to Space Architecture and Design, the proposed location is about half the size of the proposed Rams Stadium and would make Clark Street the largest sports street in America with three teams. 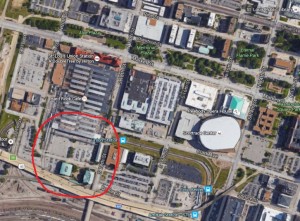 The designs for a new MLS stadium would occupy a current parking lot and be built just two blocks west of the Scottrade Center where the blues play (Google Maps).