When Jimmy Trinh was growing up, he ate banh mi almost every day. His parents, Vietnamese immigrants who also owned a restaurant, made sure that his lunch box was always filled with baguettes filled with pies and garnished with pickled vegetables before giving him each morning sent to school. Sometimes they were topped with his mother’s fragrant lemongrass chicken or the leftover beef stew they’d eaten the night before – a meal that by today’s standards made him the envy of every little gourmet in the cafeteria.

Trinh laughs when he remembers having unpacked his sandwich and repeatedly being disappointed that it wasn’t a Bologna on white bread. He remembers the desire for American-style processed meat that had little to do with the taste of his food and more to do with wanting to go with it. That negative perception of his family’s cuisine would change, however, after Trinh graduated from high school and took a supposedly three-week trip to Vietnam – a trip that turned into a year-long sojourn in the food of the homeland he left when he there was a baby. There he put on the Banh Mi and developed a passion for the sandwich that he hasn’t shaken since.

After Trinh returned from his trip to the United States, he was determined to open his own Banh Mi store, although his parents tried to dissuade him. As he saw it, the grocery store was in his blood after sleeping on the rice bags in his parents’ restaurant. Though his parents hoped the experience – and seeing them work on seventeen-hour days – would lead him to take a different path, Trinh jumped into the industry at the now-closed Tani Sushi Bistro, where he had success as a sushi maker for a decade Chef and Managing Director.

Trinh left Tani in late 2019, determined to realize his dreams of opening a Banh Mi restaurant.

After scouring neighborhoods across the St. Louis area, he found the Delmar Loop a perfect fit for the fast-casual concept he wanted to pursue, and secured a spot in Melville at a small store that was last the Indian restaurant was Taj Mahal. He refreshed the room with a coat of soothing gray paint, black and white photographs of Vietnam, and some bright red stools (a nod to the typical street food stalls he noticed across Southeast Asia), then opened the doors to the Banh Mi Shop as it prepared on Aug. February 2020 to shake hands and welcome guests to his restaurant.

What he wasn’t prepared for was a global pandemic. As Trinh explains, his vision for the Banh Mi Shop was an old-school, quick-service mom-and-pop-style place where he could get to know his guests through face-to-face interactions. He didn’t have a phone or a website – he didn’t want them. Instead, he hoped his restaurant would be a place people would go and learn through word of mouth.

He had just that for a couple of weeks. Business was solid and Trinh was busy but adjusting to the rhythm of the business. When the COVID-19 pandemic hit St. Louis, his world was turned upside down and like every other restaurateur in town, he had to adapt quickly. He set up an online ordering system, got a phone, and prepared to serve his guests the food he was so proud of, even if he had to do it differently than he intended.

The outside observer would have no idea that the Banh Mi Shop in its current form was not what it was originally intended. Trinh is absolutely delighted with the experience this moment demands right now, starting with his seamless online ordering system. Clearly, and with every option and modification designed to customize your order with the simple click of a button, it’s an enjoyable ordering experience that reassures you, before you even get to the restaurant, that he’s doing everything right. That feeling is borne out by its equally user-friendly roadside pick-up experience, which is currently the Banh Mi Shop’s only option to have its food. When you order online, the platform will ask you to enter your vehicle information so that Trinh can quickly pick up your order from you when you drive to the specified pick-up point. On my visits, he was at my car window for an initial greeting within a minute, and I had my meal in less than five. 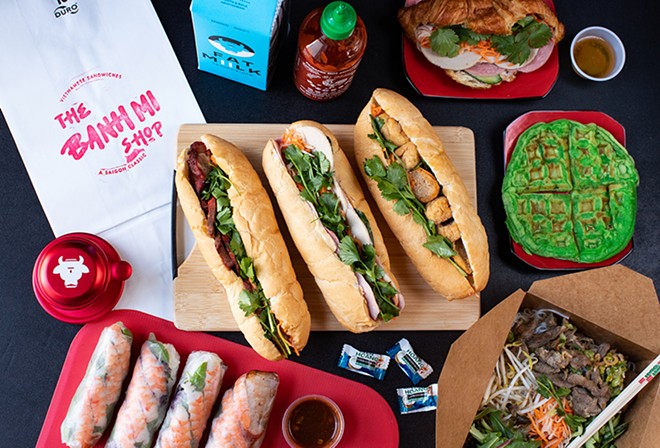 Trinh is equally thoughtful about the packaging, presenting his food as if it were a special gift to be unwrapped and enjoyed instead of just being pulled in – and when you bite into it you realize that it actually is. His Vietnamese croissant is packed like a wonderful bouquet of shortbread, cheese, pate, ham, homemade aioli and pickled vegetables. He leaves the top open so that the cone-shaped sandwich can be enjoyed on the go without the flaky layers of the incredibly buttery croissant crumbling all over the place. It’s as carefully thought out as it is delicious.

The restaurant’s sandwiches of the same name are also well packaged to take away. Instead of simply wrapping them in butcher paper secured with tape, he shapes the paper so the top is open and puts a rubber band around the center so his guests can comfortably eat as they walk down the street. It’s a nice touch considering how perfectly flaky the bread is. Trinh worked with Vitale’s Bakery to develop a baguette that is soft and chewy in the middle and coated in crumbly golden layers on the outside. It’s a wonderful canvas for fillings like hearty soy-glazed grilled beef that illuminates the palate with a touch of heat, or its mother’s special lemongrass chicken, whose flowery and warmly flavored piece rubs a wonderfully scented accent into pieces of juicy chicken thighs. The restaurant’s signature sandwich, the “Saigon Classic”, should be the standard by which other Banh Mi are judged. Head cheese, pâté and ham are poured with creamy aioli; Savory pickled carrots, daikon, and jalapeno cut through the richness like a built-in wet nap for your mouth. 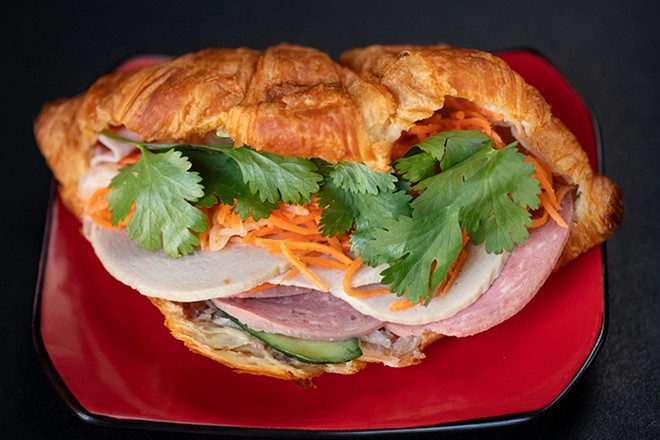 Although sandwiches were the inspiration for the Banh Mi Shop, Trinh hits the mark with other dishes too. Its pasta bowls are just as good to take away as the sandwiches. Vegetables and pasta are deconstructed and layered in the to-go box so you can put them together when you’re ready to eat.

Chicken curry is rubbed in warm but not overbearing condiments, and the barbecue pork version had just a hint of lemongrass. Both were served with a funky and spicy citrus, lime, and fish sauce that is served separately in a to-go casserole dish so it doesn’t spill all over the place. His talent for details is only matched by his culinary skills. 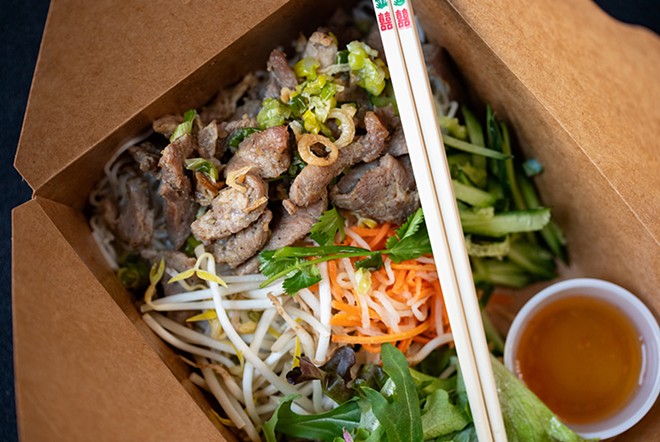 Spring rolls, tailor-made for the handheld, are another hit. The rolls are so massive and overflowing with jumbo shrimp and barbecue pork that they almost bulge out of their rice paper wrapping. The accompanying sauce – a mixture of hoisin and peanut – strikes the perfect balance between sweet and savory, with the peanut offering an undertone rather than an overtone.

Trinh is open about the dangers of opening the Banh Mi Shop during the pandemic. Despite having social media tools, the restaurant should be word of mouth that students and loop pedestrians can stumble upon. His vision was to stand by the open door, engaging with people passing by, and encouraging them to go in where they could chat while they waited for him to prepare their food. He laughs when he thinks about the year and says that he is almost done crying himself to sleep at night. Hopefully it will get better. The only tears that should be shed at the Banh Mi Shop are the joy of this stunning croissant. 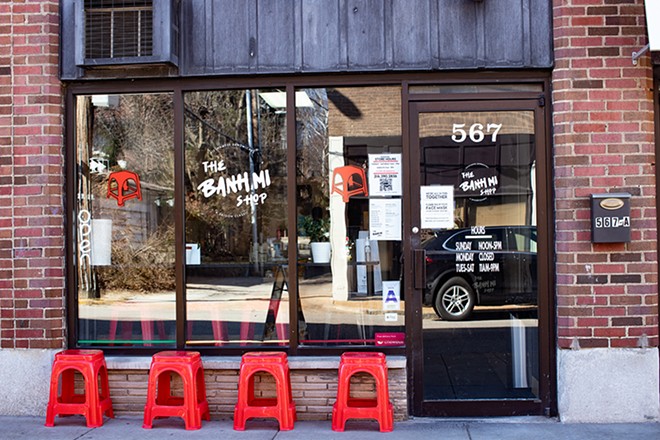